According to Abbreviationfinder, the Sierra Leonis are known for their kindness and hospitality. You can generally behave fairly in the company of Sierra Leoneans. Hand greeting is an important part of socializing and initiates all meetings, even with people you meet every day. It is not uncommon for one to keep holding each other’s hand long after the formal greeting. Communication occurs not only with words, gestures and meanings, but also through touch, one grabs the other person’s arm or shoulder to emphasize what one wants to say. In very formal contexts, this kind of body contact is not suitable at all, and the elderly should also be treated with a respect that does not allow for physical touch. During the Ebola epidemic 2014–2015, people also became more cautious with close physical contact.

One topic of conversation that should be avoided in at least superficial contacts is the civil war. The brutality left behind deep wounds that most people do not want to tear up. Almost everyone was affected in some way by the violence.

Similarly, you should avoid talking about work with people you do not know. Unemployment is so widespread that such a topic can be embarrassing.

The hospitality is great and when visiting a private home you are probably invited to stay for dinner. Rice is the staple food of all meals. It is served with pots and sauces on meat or fish, seasoned with peanuts or maybe cassava blend with onions, pepper (often piripiri), vegetables and palm or coconut oil.

Traditionally, everyone eats from the same casserole, where you pick up sauce and meat pieces with the lump of rice you kneaded in your right hand. The best pieces are always reserved for the elderly. In traditional households, women and girls usually eat for themselves or wait until the men and boys have finished eating when they get what is left over. Meals are usually taken in silence. You save the talk after the food, and generally you do not drink anything until you have finished eating. Talking during the meal is considered to show a lack of respect for the food.

According to Countryaah, Sierra Leone celebrates all the usual Muslim and Christian holidays and has few secular weekends. An exception is Independence Day on April 27. Then you can see the green-white-blue flag (see how it looks on the Sierra Leone home page in the Country Guide) and hear the national song, High We Exalt Thee, Realm of the Free.

The road network is in poor condition after decades of inadequate maintenance. An exception is the road north from the capital Freetown towards Guinea. A refurbishment of the road network has started with funding assistance from the World Bank and the EU, in particular.

Freetown has one of Africa’s best natural ports, but the facilities are severely worn down and partially bombed during the 1991–2002 war, but are now being refurbished with the support of the World Bank. Telecommunications also collapsed more or less during the war, but now a rapid expansion of the mobile networks is underway.

During the 2014–2015 Ebola crisis, almost all air traffic to and from Sierra Leone was closed; parts of it have then started again. In 2017, the international airport in Lungi outside Freetown was expected to be replaced by a new one in Mamamah (also outside Freetown) which is under construction thanks to a loan from China.

Sierra Leone has no railways for passenger traffic but two shorter lines are available for shipping iron ore from the mines to the coast. The river traffic is quite lively. 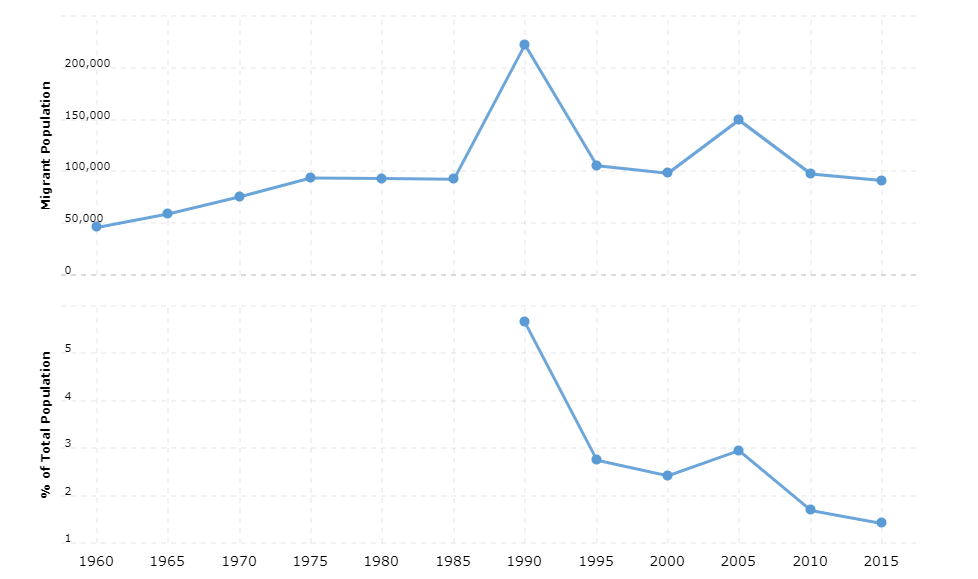 The International Monetary Fund (IMF) grants a $ 96 million loan to Sierra Leone for a three-year period. The money will be used to develop the economy and fight poverty. Figures show that the country’s GDP rose by over 15 percent in 2012 thanks to increased iron ore extraction.

According to the magazine Africa Confidential, the Sierra Leonean government is secretly helping Ibrahim Bah, a gun dealer and Ruf leader with close ties to Charles Taylor, leave Sierra Leone where he has lived since 2008. He is put on a flight to his native Senegal. Both the UN and human rights organizations have pressed for Bah to be brought to justice for their part in the abuses committed during the civil war, but nothing has happened. The human rights organization Center for Accountability and Rule of Law (Carl) has filed a single indictment against Bah. The trial against him was scheduled for August.

Two employees of the Ministry of Finance are sentenced to three and five years in prison for corruption, respectively.

At least 13 people are arrested at the end of the month in a corruption crisis involving employees within the country’s banks and tax authorities. In conjunction with this, temporary restrictions are imposed on anyone working in the banking or tax authorities.

Unrest erupts around a mine in Tonkolili, between Makeni and Magburaka in the middle of the country, after the company African Minerals Ltd started building a dam outside its area. Equipment worth several hundred thousand dollars is destroyed and personnel are taken hostage (however, they are released after a short time).

A strike later breaks out in nearby Bumbuna in protest of foreign workers receiving higher wages. The police are resorting to harsh methods against the strikers – at least one woman is killed – and criticized by the country’s human rights commission.