Greeting is an important social lubricant in Liberia. One should rather visit a little too often than infrequently, even if it comes to complete strangers who happen to be in the same room or happen to meet in a door.

To a stranger it is enough with a “hello” or a friendly nod, to a closer acquaintance, the initial greeting must be followed by a “how are you” or a request for the family. The small conversation that may follow belongs to the greeting ritual. It is impolite to abruptly throw yourself into a “more important” subject.

According to Abbreviationfinder, very special for Liberia is the “handshake button”. It happens that when two people have shaken hands in the usual way, they pull back their hands until only the middle fingers meet, and then both snap their fingers against the other so that a clear snap is heard. After a firm and heartfelt handshake, people can stand and hold each other’s hands for several minutes during friendly small talk, before ending the greeting with the characteristic button. This little gesture is said to have arisen as a mark of the joy of having escaped slavery.

Traditionally, an invitation has been needed to greet an acquaintance. The doors have been left open and it has never been considered an intrusion to show up at any moment until noon, when the food has obviously been shared with the newly arrived. In more modern environments in the cities, a dinner invitation can be made more formal, but if the guest has a visiting relative or close friend who happens to be hungry, the host does not feel bad. The basic rule is that whoever shares it with them.

Gifts occur in more solemn contexts, such as when you meet an acquaintance for the first time in a long time, or come home from a trip, when a city dweller visits his or her home town or a villager visits immigrant relatives in the city. City dwellers who go out into the countryside are conveniently carrying goods that are difficult to obtain in the village, such as a factory-made shirt, kitchen equipment or sweets for the children. Rural residents bring fruit or vegetables, a chicken or perhaps a home-woven fabric to the city.

Usually everyone eats from the same dishes and bowls. With your hand or a spoon you take from your own part of the dish. In the cities, you now usually have your own plate, which, like the glass, is placed upside down to mark that it has not been used since it was washed.

Rice is the basis of almost all meals. It is supplemented with sauces made from vegetables, root vegetables or peanuts as well as meat or fish of those who can afford. Spicy peppers are the most common spice, and when everything is cooked after an hour or two, palm oil is usually added.

Palm wine and yeast sugar cane juice are the most common traditional alcoholic beverages. Beer and Western spirits are most common in cities.

Official events, which a visiting Westerner can end up with, are usually strict and require formal and cluttered attire, no matter how hot it is.

In social interaction, it is important to remember that Liberia is an authority-bound society, where elders and superiors should be shown the utmost respect and addressed with titles or Mr / Mrs plus surname. To call a person who is higher in rank than one by the first name is considered unfair. Otherwise, the social tone is usually unforced, almost intimate. Body contact is normal (during the Ebola crisis of 2014–2015, however, this practice changed), close and long eye contact as well, both towards one’s own and the opposite sex.

In deeply religious Liberia, all Christian holidays are celebrated, although not all are official holidays. According to Countryaah, the second Wednesday in March is Decoration Day, when you decorate the ancestors’ tombs. Among the non-religious weekends are the Armed Forces Day on February 11, the First President Joseph Jenkins Roberts’s birthday on March 15, the African Day on May 25 on the anniversary of the African Unity Organization’s OAU Founding 1963, Independence Day on July 26, Thanksgiving Day the first Thursday in November, a custom that the first released slaves brought from the United States, and William Tubman’s (see Older History) birthday on November 29. Tubman was the country’s president from 1944 to 1971.

The Liberian flag, which is also honored with its own holiday on August 24, shows the country’s close historical ties to the United States. It’s like the American one, but with eleven red and white horizontal bands instead of the US 13, and just a white star in the blue bar on the top left. The stripes symbolize the men (they were really twelve) who signed the Declaration of Independence, red for courage and white for moral raising. The white star marks the freedom from slavery and the blue field symbolizes the African continent. See what the flag looks like on the Landguide homepage for Liberia!

The text of the national anthem, All Hail, Liberia Hail !, was written at the independence of 1847 by Daniel Bashiel who then became Liberia’s third president.

Large parts of the communication network in Liberia were destroyed during the war, which is still an obstacle to economic development in the country. The roads, which were previously poorly developed, are often in miserable condition. Unpaved roads are often difficult to reach during the rainy season. Since 2007, however, a general overhaul of the road network has been ongoing. In central Monrovia, most of the streets have been repaired after the civil war.

Prior to the war, Liberia had 49 kilometers of railroad on three routes from Monrovia and Buchanan for freight services to and from mining inland. The traffic was closed down in 1990 when the mines were closed and the railways were sold as scrap. However, since the mining was reopened some time in the 2000s, the steel company ArcelorMittal has restored the freight rail from the Yekepa mine to Buchanan, while the China Union undertook to restore and modernize the line from the Bong mines to Monrovia.

The most important ports are the free port of Monrovia, Buchanan, Greenville and Harper. Even in the case of the two first (and largest), ArcelorMittal and China Union have undertaken to expand and modernize these. The Danish-owned APM Terminals was given a 25-year assignment in 2010 to operate and expand the port operations in Monrovia.

Robertsfield International Airport a few miles southeast of Monrovia was closed in 1990 but reopened in 1997. In 2014, all air traffic to Liberia was canceled due to the outbreak of Ebola. A large part of this traffic – but not all – was resumed in mid-2015. 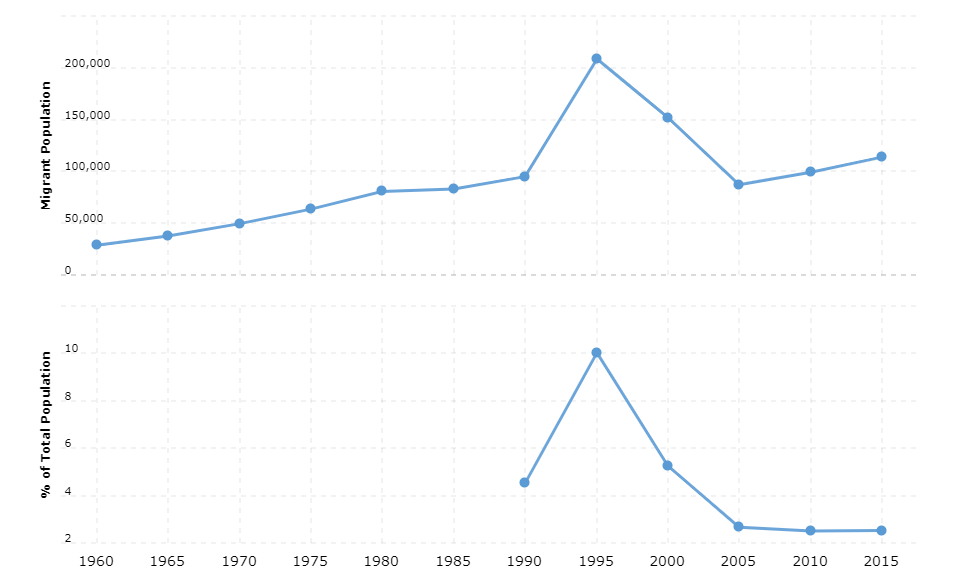 Steel giant ArcelorMittal signs an agreement on investments in new mines. The agreement is worth at least SEK 7 billion.

At the same time, the first stamps are printed for many years.

A Truth and Reconciliation Commission is formed

Its mission is to investigate war crimes and promote peace and reconciliation. The Commission will start work this fall.

Ex-President is extradited from Nigeria

Former President Charles Taylor is sent to Sierra Leone to stand trial for involvement in that country’s civil war.

Johnson Sirleaf takes over as president