The Hesiodic poetry must in reality be connected with the cyclical one, of which it is contemporary. In fact it represents, like the cycle, the decay of the fantastic and heroic spirit in the generations following Homer; and it is channeled, together with that, into the same riverbed that will lead to history and philosophy. This does not mean that in Hesiod – in the compositions that belong to his personality, and that of his personality are revealing, such as Works and Days and to a certain extent Theogony – the poetic affection is lacking or totally lacking. This is revealed especially in certain movements of heartfelt sadness or indignation and in a certain fervor of moral and religious passion. But the poetic values ​​are permeated and absorbed in a more general and broader form, which is not, and does not intend to be, of pure art, but of knowledge and wisdom.

The detachment from Homer, not only under the artistic aspect, but above all under the intellectual aspects, is deeply felt both in the cycle and in Hesiod and his successors. And it becomes all the more accentuated, the more one proceeds in the century. VII and in VI a. C. Usually it is unconscious: since unconsciously it also changed the way of understanding the Homeric poems into the very ones that exalted them and welcomed them as the foundation of every culture. But other times the detachment is intentional, and takes on the characteristics of revision, opposition and criticism.

An ancient anonymous composition, whose origins date back to the century. VI or VII (although it reached us much later, through the Museion of the rhetorician Alcidamante), he told a kind of fake poetic clash between Homer and Hesiod – the Agone of Homer and Hesiod – in which the second was victorious: and victorious precisely in thanks to the superiority of his moral and religious concepts. This little book was probably composed in some school of rhapsodes (in Boeotia); and it is very significant, because it discovers for us what ferments and forces of thought were stirring around the old forms of the epic. The Ionian epic, in its enormous diffusion and in its now long duration, brought with it the seeds of dissolution. All that it acquired in breadth it lost in depth. He absorbed various elements, yielded to the growing spiritual demands; he approached logography, history, science; it became a form capable of welcoming everything. But with that the epic spirit was killed. In fact, while cyclical and Hesiodic production still persisted, already it opened the way to parody: joking and anecdotal compositions entered the scene which are the absolute reversal of the epic. For example, between the century VIII and VII (that is, in an epoch prior to Archilochus, who already mentioned it) the Margite, a parodic poem which was even attributed to Homer: evidently because it was composed by a group of Omerides, in Ionia itself. In this work the sublime Achilles was replaced by a poor scoundrel, named Margite, who “knew many arts but all evil” and made a very ridiculous figure in the humblest circumstances of life. The violation of the epic-heroic spirit was then made all the more evident in that another meter was interspersed between the solemn hexameters, drawn from the lower strata of popular and vulgar poetry, the iambo: a meter that would receive the definitive literary baptism from Archilochus.

Thus, the heroic world, on which the epic rested, was gravely threatened (especially, of course, in the evolved consciousness of the Ionians). Beyond it not only did reflection, historical curiosity, pragmatic interest, moral and religious meditation mature, but also the humble or grotesque world of ordinary life was emerging with its infinite possibilities. This had even been approached a little by Homer, not in the Iliad, but in the Odyssey (which precisely therefore has a more modern nature or appearance); and then he had been more welcomed by Hesiod, in The works and the days. But its true manifestations were found mostly in the uneducated experiments of the novel and fable. Alongside the superb narratives of the heroes’ deeds, which the rhapsodes carried from town to town, this more humble but no less universal kind of culture could not be missing. The epic represented the noble, warlike, adventurous side of life. And the story is the other side: everyday life, modest, common, bourgeois. By variety of subjects, by power of personification, by breadth of meaning, this was also a kind of epic, or rather it was the great “human comedy” that was first sensed by the people’s spirit of observation; and that it often remained among the people, entrusted to the shapeless care of plebeian authors (as it will be, in the sixth century, Aesop); sometimes it was transmitted to art of the most authentic poets. Archilochus, the great giambographer, who appears right in the middle of the century. VII, was essentially a poet of fairy tales: and for this reason the critical-literary tradition of the ancients assigned him a place corresponding, although antithetical, to that of Homer. 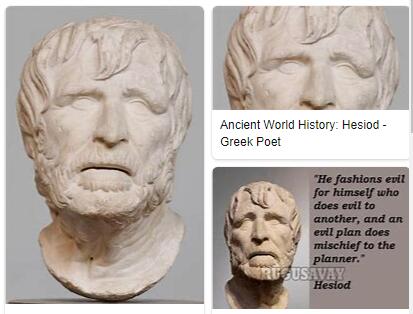