According to Abbreviationfinder, the Gambians usually have a tolerant attitude towards one another despite different ethnicities and religions. Foreign visitors can also expect a friendly response. Customs and customs vary among different ethnic groups.

Traditionally, mandinka has been strictly divided into four social groups, in turn divided into subgroups. There was a kind of nobility and a group of free farmers, traders and religious leaders (marabouts). A third group consisted of craftsmen and so-called griots – poets, singers or bards who had the important role of conveying knowledge and information. A fourth main group were the slaves.

Several of the other ethnic groups were divided in similar ways. Although the social systems have largely been eradicated, perceptions of class affiliation sometimes persist and mean that it can be considered inappropriate for marriage between individuals of different backgrounds.

Health is often done with a handshake and by pronouncing the (truly Arabic) peace salaam aleikum. Inland, one often hears the same desire on mandinka, kaira pray, while in the coastal areas it is common with nanga def (wolof: how is it).

It is important to use only the right hand to give or receive objects, as the left hand is considered unclean. This is especially true of food.

Lunch is often the most important meal. Traditionally, Gambians eat from a large, communal bowl. Eating is then done with the right hand or with a spoon. Rice is basic food, although millet, couscous and cassava are also common. For this, pots of peanut paste (domoda) and other tubes of meat, fish or chicken and vegetables are often eaten. A common dish is “jollof rice”, or benachin (“a stew” on wolof). It is a spicy blend of rice, tomato puree and spices, to which meat, vegetables or fish are added. On the coast you can eat freshly caught and grilled fish and seafood.

A local beer is Christmas Brew. However, most Gambians do not drink alcohol because they are Muslims. An ordinary drink is instead attaya, a strong and sweet tea made on green tea leaves. Brewing tea is a social ritual that often takes a while.

Traditional clothing in The Gambia usually consists of long and free fabrics. Women often wear colorful and footwear suits that also cover their arms and a piece of fabric on their heads. The men have a kaftan that similarly covers most things except hands, feet and head. An alternative is a three-piece suit that is usually richly embroidered with embroidery, and with an embroidered hat on. Men in particular, but also women, often wear Western clothing. Foreign visitors should keep in mind not to appear too undressed other than on the beach.

Attention is paid to both Muslim and Christian holidays. A major Muslim festival is the party that ends the fasting month of Ramadan: id al-fitr, or koriteh as it is locally called. The sacrificial feast id al-adha, here called tabaski, is celebrated in memory of Abraham’s willingness to sacrifice his son according to God’s will. The Prophet’s birthday, milad al-nabi, is also a holiday. The Muslim holidays follow the lunar calendar and fall on different dates from year to year. So does the Christian Easter – Good Friday and Sunday Easter are holidays, as is Christmas Day and Marie’s Ascension on August 15.

A major non-religious celebration is Independence Day on February 18, which is celebrated with large parades and military marches in Banjul. July 22 is the day of the revolution, when the 1994 coup is celebrated. Also New Year’s Day and May 1 are public holidays.

Motorways run along either side of the Gambia River but the quality is generally poor. Freight is transported mainly on the river, which is navigable 20 km upstream for smaller vessels. There is no railroad.

An agreement was signed in 2003 with Senegal to build a bridge over the river, mainly to facilitate the passage between the Casamance region and the rest of Senegal. No bridge construction had begun just over ten years later. The Gambia is probably not interested in a bridge, which would mean a loss of revenue from ferry traffic across the river.

The port of the capital Banjul handles some international freight traffic.

The only airport is outside Banjul, and thus close to both the coast and the major urban areas. The air links are good with a number of destinations in Africa and Europe. The national airline is called Gambia International Airlines. 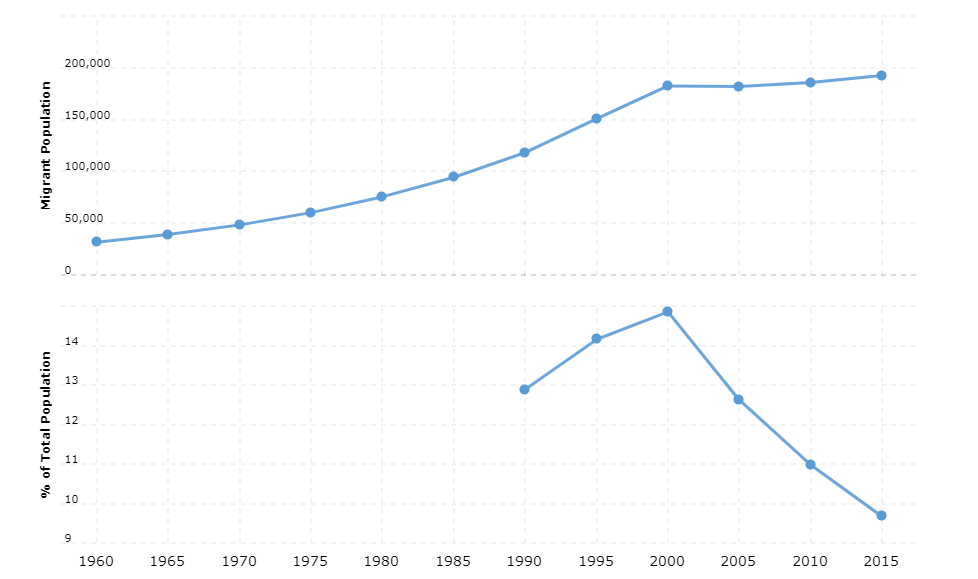